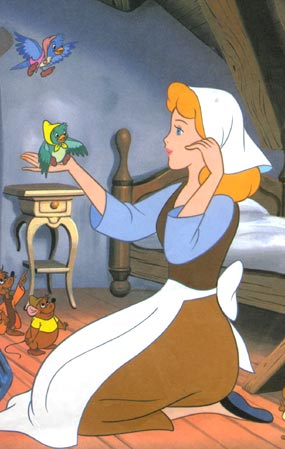 Once upon a time a lovely girl called Cinderella lived with her stepmother land two proud land ugly stepsisters. They made her work hard all day, and in the evening she had to sit among the cinders. One day the king’s son gave a Ball to which everyone was invited. What an unhappy day that was for Cinderella! She worked harder than ever for her stepmother and two vain stepsisters, preparing their finest gowns for the Ball.
When everyone had left for the Ball, Cinderella sat sadly by the fire and began to cry. Suddenly, in a bright flash, a lovely lady appeared. “I am your fairy god mother,” she said. “Why are you crying?” “Because I want to go to the Ball, but I have no dress to wear,” said Cinderella. “I will help you,” said her Godmother. “Hurry and bring me a large pumpkin, some white mice and a rat.” Cinderella quickly brought the things to her Godmother.
Waving her magic wand, the fairy Godmother turned the pumpkin into a golden coach, the rat into a fine coachman, and the white mice into handsome white ponies. Cinderella’s ragged clothes became a beautiful ball-gown, and on her feet were sparkling glass slippers. “Be off, Dear Child,” said the Godmother, “but remember whichever happens, you must leave before the clock strikes twelve, or everything will turn back the way it was.
When Cinderella arrived at the Ball, she looked so lovely that everyone turned to gaze at her. The Prince was so enchanted tat he danced only with Cinderella. In her happiness, the hours slipped by until she suddenly heard the clock striking midnight. Remembering her Godmother’s words, Cinderella fled from the palace, and, in her haste, she lost a slipper. The Prince ran after her, but all he found was the tiny glass slipper.
The next day the Prince searched everywhere for the owner of the slipper, declaring he would marry only the lady whose foot it fitted. When the Prince came to Cinderella’s house, the ugly sisters tried to force their bulging feet into it. But they were much too big. Finally Cinderella tried, and it fit perfectly! The Prince was overjoyed and asked Cinderella to be his bride. There was rejoicing throughout the land, and they lived happily ever .